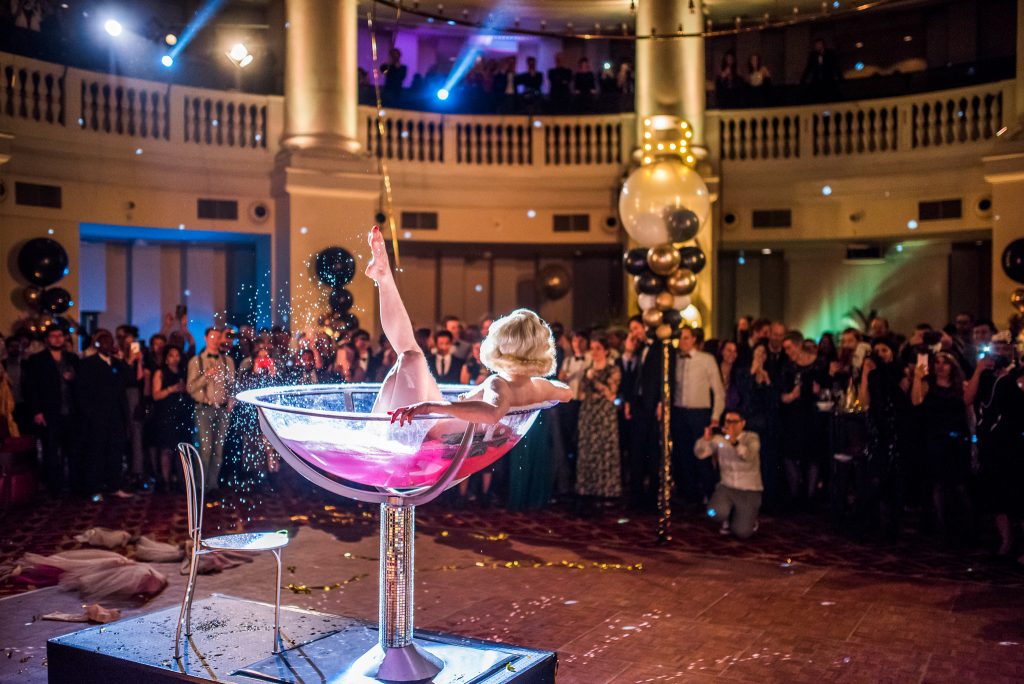 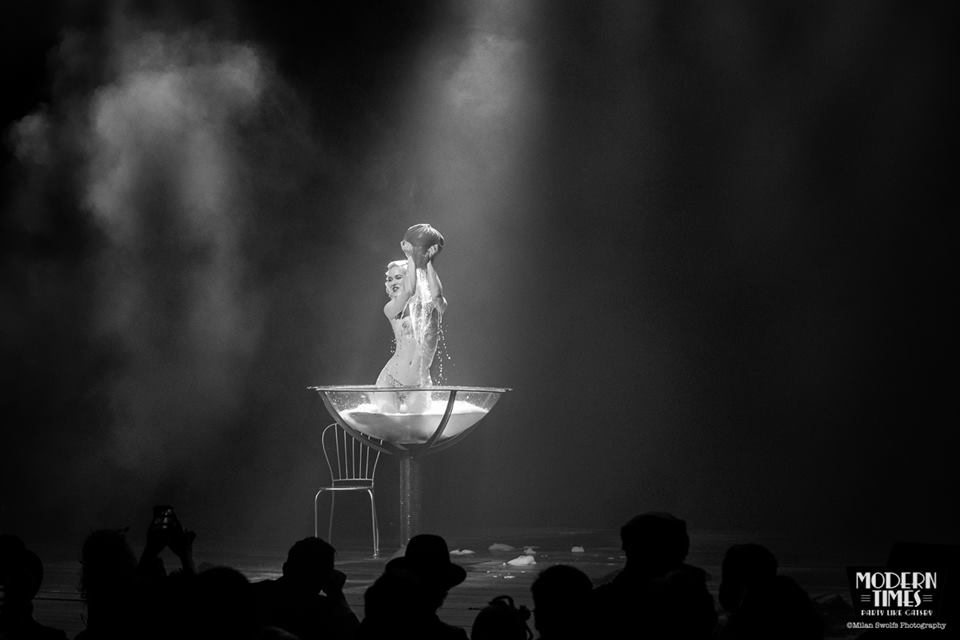 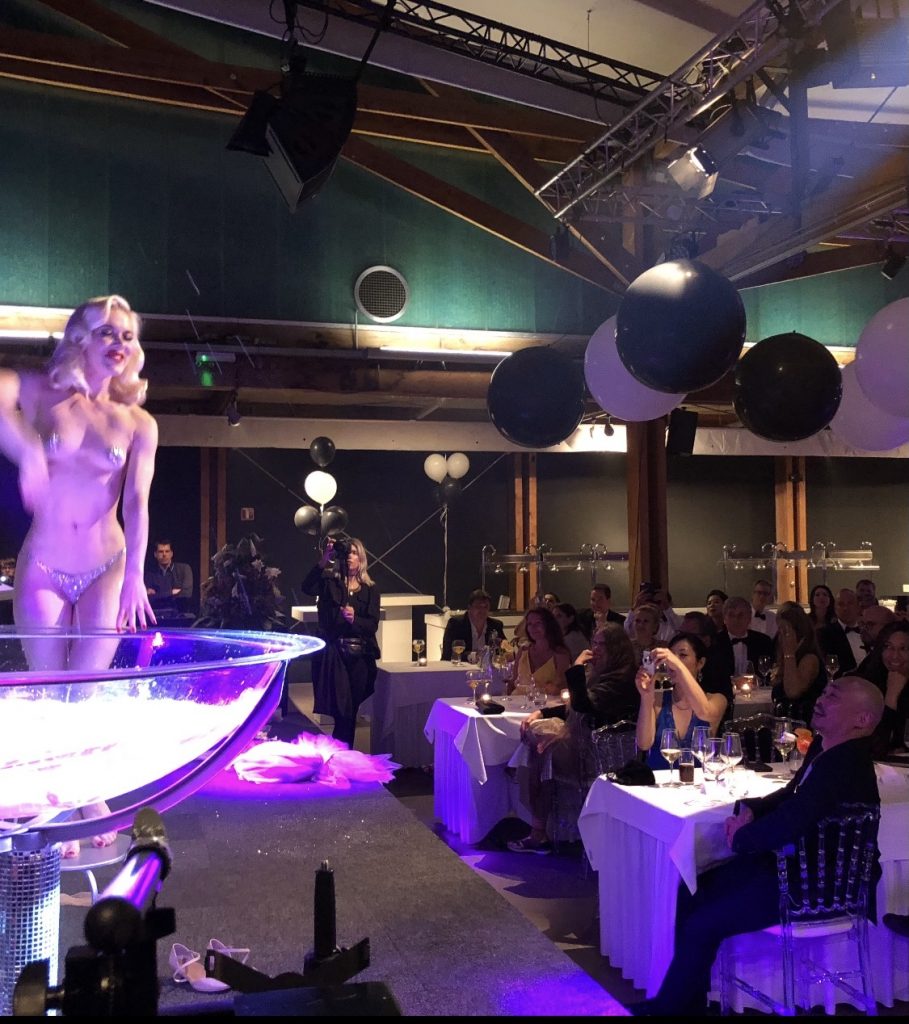 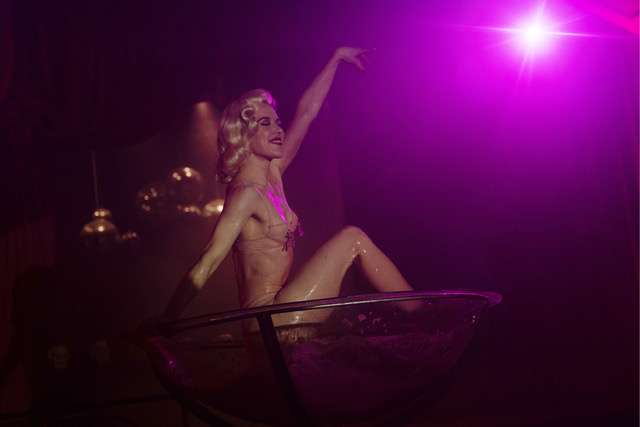 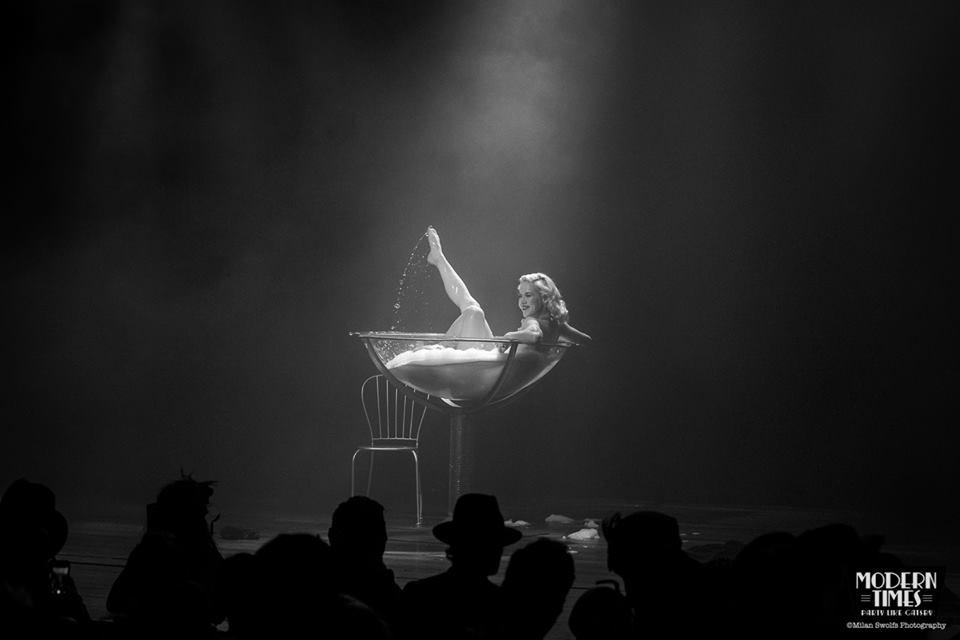 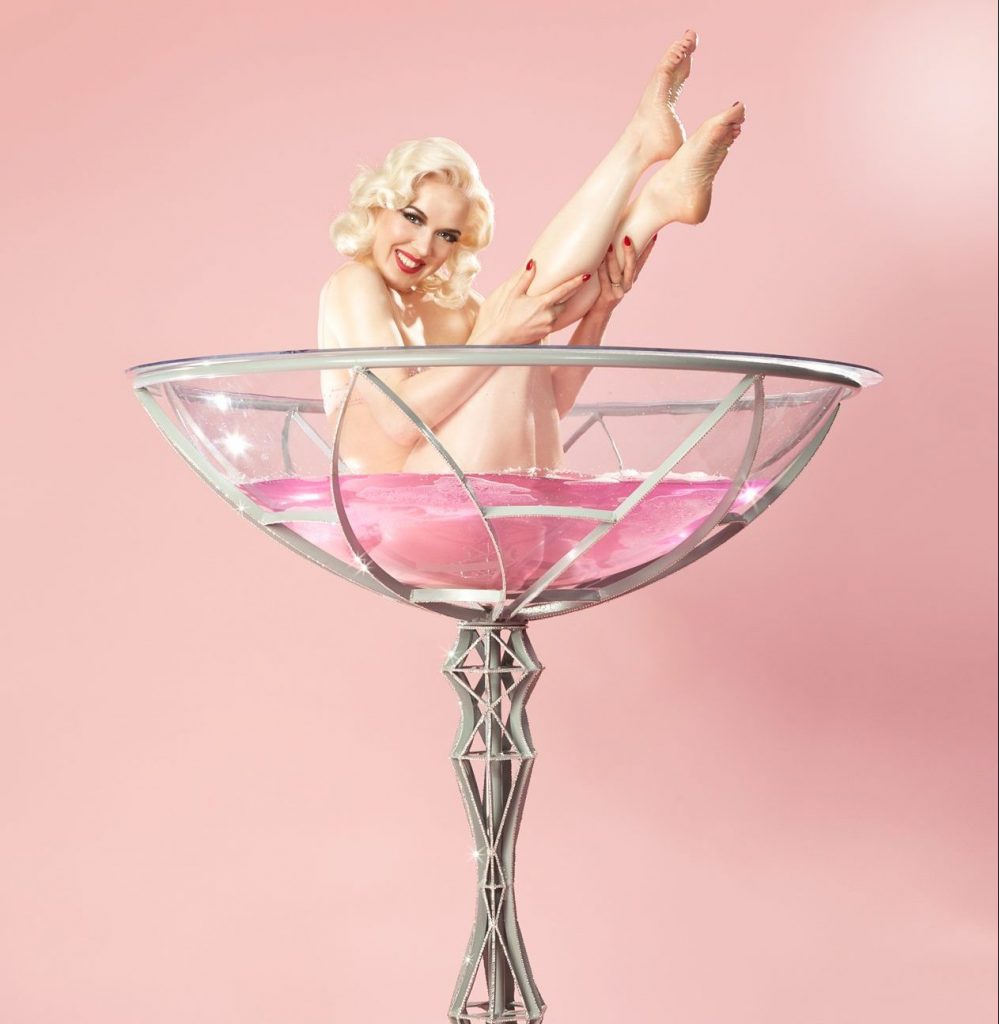 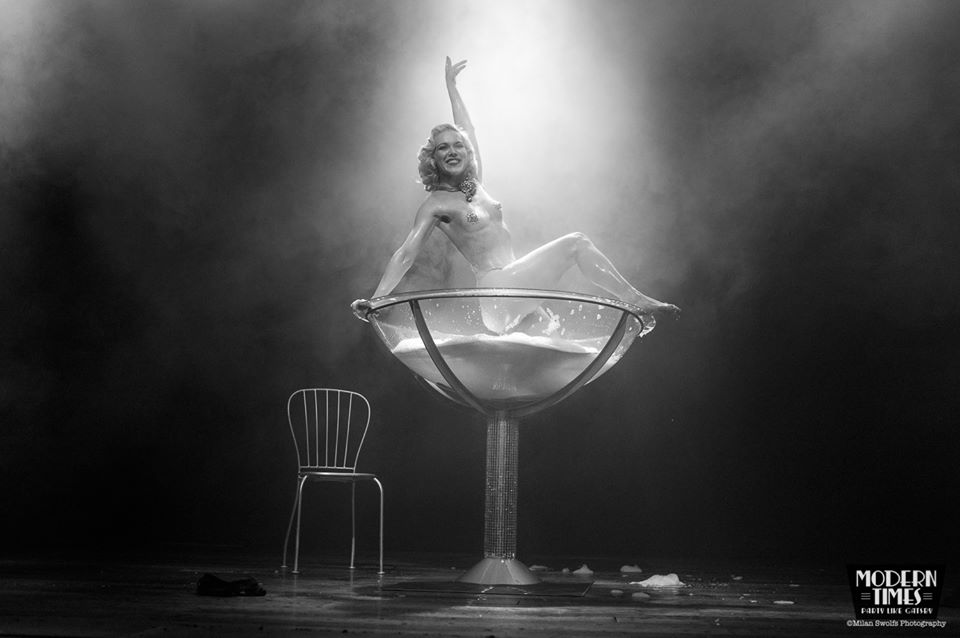 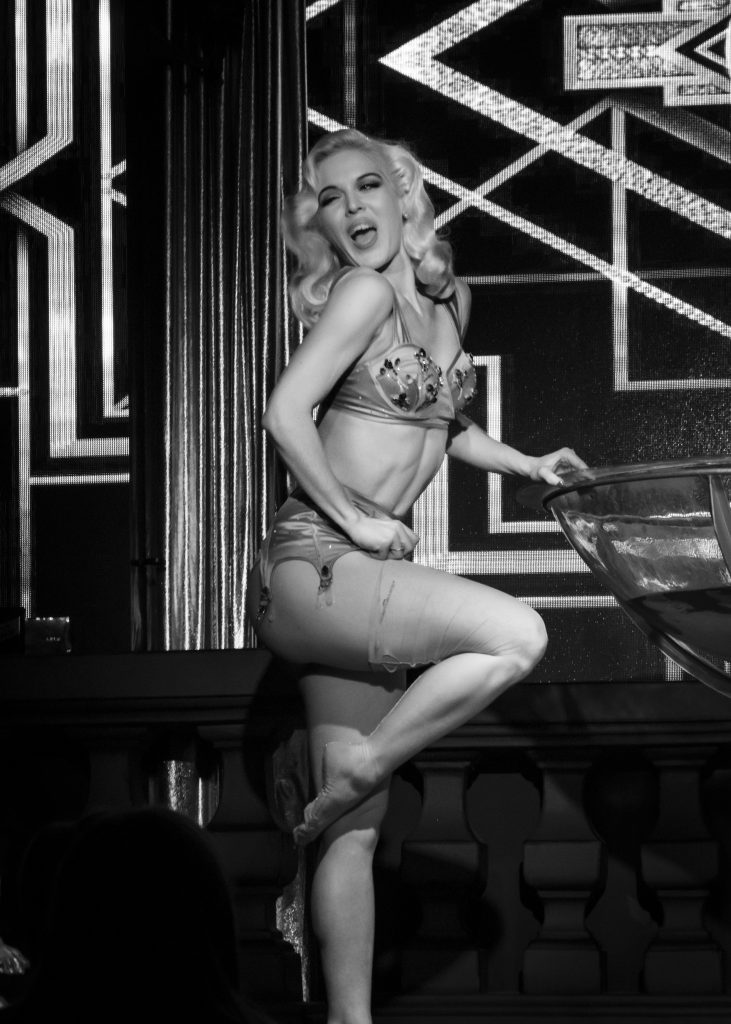 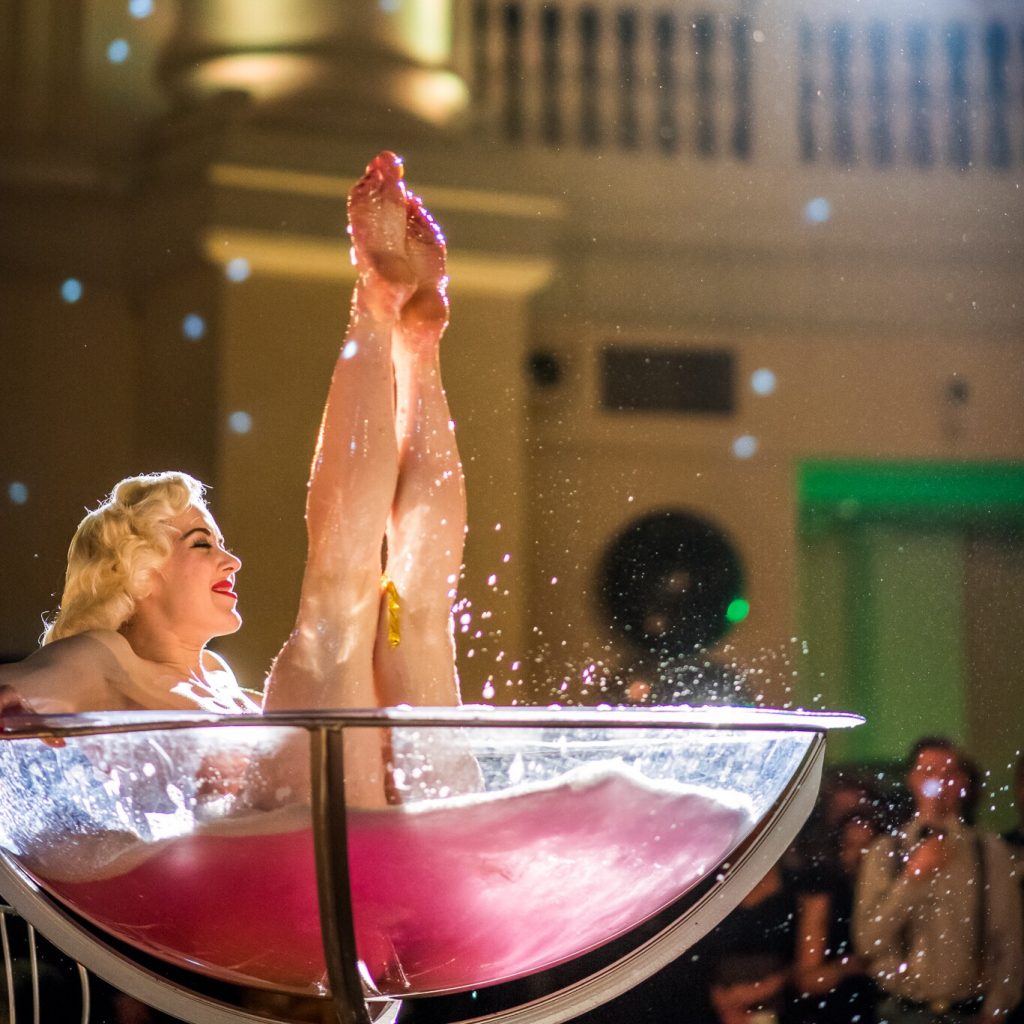 Book the most spectacular burlesque act in the Netherlands and make your corporate or private event a splash. The Champagne act “wows” guests with a glimpse into Fay’s sultry morning ritual: a bath in a giant glass of champagne.

Pink Champagne is Fay’s signature act. In this performance, Fay wears a gorgeous handmade costume that combines new technology with Old Hollywood glamour. Dripping with Swarovski crystals, Fay ignites the stage with her classic burlesque performance and teases audiences with an enormous (ethically sourced) ostrich feather boa. The act culminates with a strip tease, and your audience gets to watch as Fay takes a bath in her art-deco style champagne glass.

This act is perfect for Peaky Blinders or Great Gatsby themed parties.

Fay has previously performed versions of this act for &C Magazine, The Seafood Bar, and Holland Casino.

Fay designed her champagne glass herself, and it’s a perfect fit for the costume and ostrich feather boa. It’s coated in the same silver elements, and bedecked with nearly 10,000 Swarovski crystals.

Book Fay Loren for her fabulous champagne act — it’s a spectacular show on every stage. In this show she performs an elegant striptease and takes a bath in a giant champagne or martini glass.

The champagne glass is one of the most iconic burlesque acts, and you can find photos of women performing their variations as far back as the 1920s, ‘30s, and ‘40s. Fay was inspired by these images of stunning pin ups and dancers in their glasses and decided to create her own version of the classic act.

A short history of the champagne act

Sign up and be the first to know about exclusive events, news, and announcements.

This website uses cookies to improve your experience while you navigate through the website. Out of these cookies, the cookies that are categorized as necessary are stored on your browser as they are essential for the working of basic functionalities of the website. We also use third-party cookies that help us analyze and understand how you use this website. These cookies will be stored in your browser only with your consent. You also have the option to opt-out of these cookies. But opting out of some of these cookies may have an effect on your browsing experience.
Necessary Always Enabled
Necessary cookies are absolutely essential for the website to function properly. This category only includes cookies that ensures basic functionalities and security features of the website. These cookies do not store any personal information.
Non-necessary
Any cookies that may not be particularly necessary for the website to function and is used specifically to collect user personal data via analytics, ads, other embedded contents are termed as non-necessary cookies. It is mandatory to procure user consent prior to running these cookies on your website.
SAVE & ACCEPT